Vicious titans have attacked the village with their mighty powers. The entire village is screaming in agony. Showcase your challenging skills to knock down titans!
Download APK
0/5 No votes
Report
Developer
JustHappyVersion
2.2.5.48
Updated
Oct 6, 2022Requirements
5.1
Get it on

Vicious titans have attacked the village with their mighty powers. The entire village is screaming in agony. Showcase your challenging skills to knock down titans!

Attach The Titans: Rope Game is an exciting game with a thrilling war theme. There are many challenging levels waiting for you to explore. Be attentive and use your sword to break the titans apart. This titan brawl game gives you goosebumps while facing giant and stolid creatures. We have introduced two main modes and different characters to provide you with a better gameplay experience.

Move forward, throw rope, find enemies and kill them. Beat enemies until they run out of life. A tenacious attitude will be your primary asset in confronting deadly titans. Your avatar can drink saliva and blood potions of titans to multiply the power. Collect coins and unlock characters with new costumes.

Attack The Titans game has an excellent combo of fun and adventure that gives you a true sense of entertainment and thrill. However, this is one of the best Titans attack games for players of all ages. Intuitive controls with simple widgets make it super easy to handle your avatar while wandering around the village.

Titans damage everything they see, and you are the last hope to stop the disaster. Attack The Titans game has a dynamic interface with smooth animations that keep you engaged with the gameplay. Interestingly, you can enjoy gameplay in English or Bahasa language.

Attack the titans and kill enemies to make your land smile again in freedom!

WHAT IS ROPE GAME?
You are a warrior and an excellent swordsman using ropes to maneuvers in all directions. You are the best wall guardian in your village. Relentless Titans have attacked your village. At that moment of fear, you can only defeat the troop of Titans to save your village.

== Adventure Game
In our Attack The Titans game, both fun and adventure go hand in hand. This is an adventurous game that helps to explore your bravery against powerful villains. Stop titans from ruining your village and get surprises.

Attack The Titans to explore powers of a real warrior!

== Dual Modes
We have added two main modes that come with different levels and challenges. In adventure mode, you will have to kill all titans to play next levels. Meanwhile, you will kill titans as much as possible to set a high score on the leaderboard in titan brawl mode.

== Easy Gameplay
There are intuitive widgets displayed on the screen. Use weapon button to attack enemies with a sword. Tap on the screen to throw rope anywhere and tap cut button to stop flying with rope. You can add the player’s name and swap the language easily.

HOW TO PLAY?
➡️ Explore both adventure and brawl modes
➡️ Use handle and throw rope to maneuver
➡️ Attack the titans until they run out of energy
➡️ Collect coins to unlock new characters
➡️ Drink saliva potion to become strong and invincible
➡️ Drink blood potion to increase your energy 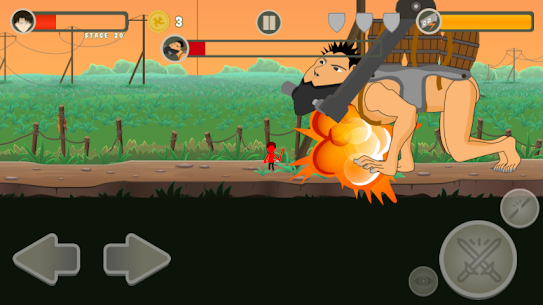 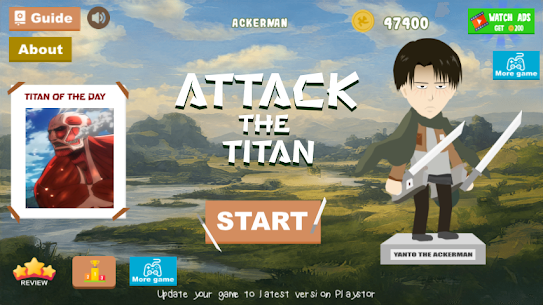 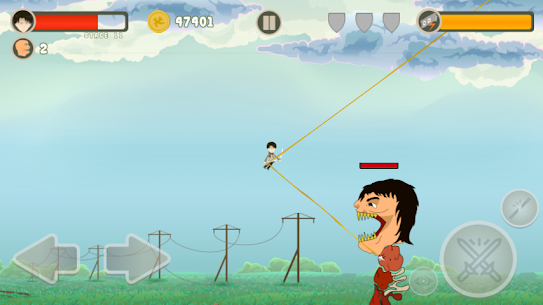 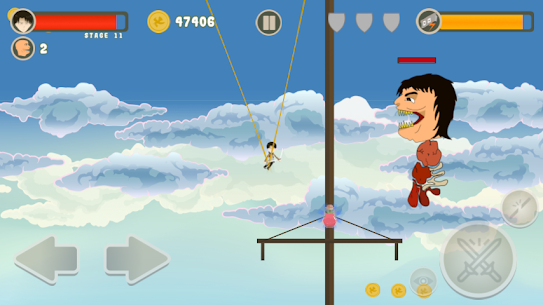 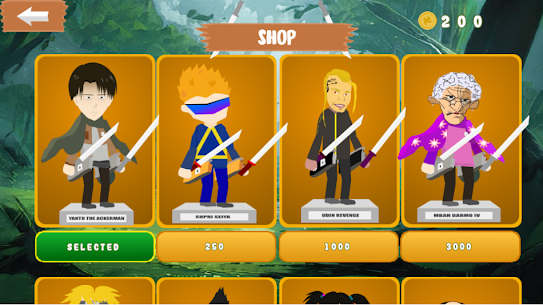 Ads can be removed. New options to get more coins.